We had a cookout a few weeks back and as I was hurriedly putting the mac-n-cheese in the oven, the flimsy foil pan bent and toppled.  About half of the Mac-n-Cheese fell on the inside of the oven door.

The oven was pre-heated and I was able to save half of the mac-n-cheese so I baked it.  I told myself I’d clean the oven “later”.  Well, it’s been about two months – not a few weeks – if I’m going to be honest.  This is what my oven looked like after two months of numerous uses since the messy mac-n-cheese spill.

I did some research on how to best clean the oven door so we can once again see through the glass.  Being mindful that I probably don’t want to use harsh chemicals that will later be baked along with our food, I found this “natural” remedy:  Water and Baking Soda.

If your oven is not as dirty as mine, mix about 1/4 cup of baking soda with water until it forms a runny paste.  If your oven is like mine (baked on thick cheese), you will need twice as much paste (like I did). 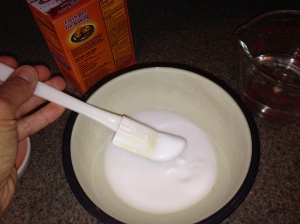 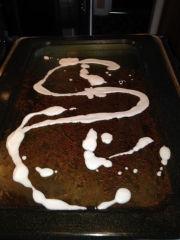 After letting it sit, wipe it off.  If there are still spots, you can scrub with a scour pad.

I had to do this TWICE and let it sit both times for a 1/2 hour.  Then I had to put some major elbow grease behind the scouring.

But, It worked!  I can see my floor through the glass!! 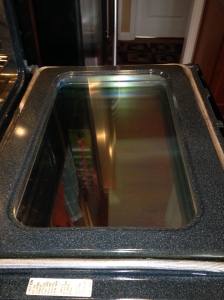 Has this happened to you?  Please share your cleaning tips in the comments.